The Developing Excellence in Medical Education Conference (DEMEC) is a bi-annual conference with conference management provided by Wheldon Events. The 2021 event was held over two days at Manchester Central and attracted 1400 delegates from the medical education and training community, which was a mix of 500 delegates attending in real life and 900 attending virtually.

The fourth DEMEC took place in December 2021. "It was vitally important for the event to be held in an environment that was as Covid safe as possible, but still feel inclusive and welcoming," said Natasha Dougall, owner of Wheldon Events.

The in person element comprised of five plenary sessions and 30 seminar sessions held in four tracks over the two days. "We needed to get delegates into the plenary sessions as quickly as possible to avoid queues," says Dougall. "Delegates have to pre-select their seminar tracks so the entrance to each room needed to be monitored to ensure they were in their chosen sessions. We would normally employ a person with a scanner to stand at each room but we wanted to cut down on non vital human interaction."

"We have worked with RefTech to provide the registration and scanners for DEMEC since its inception in 2015 and they suggested that their ASPods would help," says Dougall.

"We needed to get delegates into the plenary sessions as quickly as possible to avoid queues." 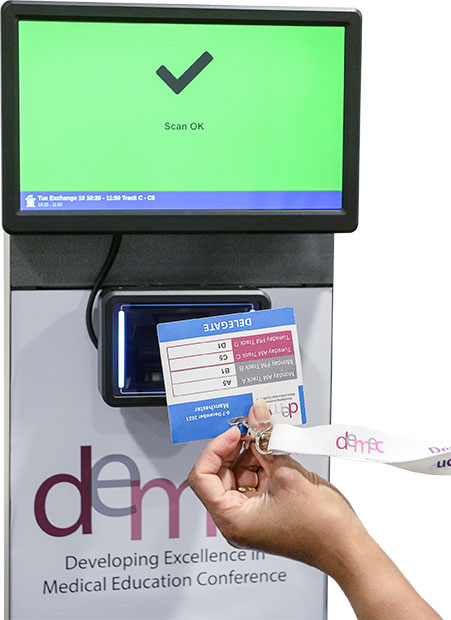 The Autonomous Scanning Pod (ASPod) are free standing and completely wireless allowing them to be placed anywhere and moved easily. They allow delegates to self-scan their badges on entry to an event and at key check points such as entry to seminars. They help to remove human contact and thus reduce the risk of Covid transmission, whilst being a live scanner that works in real time to capture data and cross check delegate information against the registration database.

"On day one the RefTech team placed three ASPods at registration, two at the main door to the plenary room, and one at a side door. Another five ASPods were placed on the entrances to each of the seminar rooms," continues Dougall . "On the second day, two ASPod units were moved to the top of the escalators so that repeat delegates could just scan their badge without having to go back to registration."

"Having the ASPods outside each of the session rooms enabled us to cross check who attended." 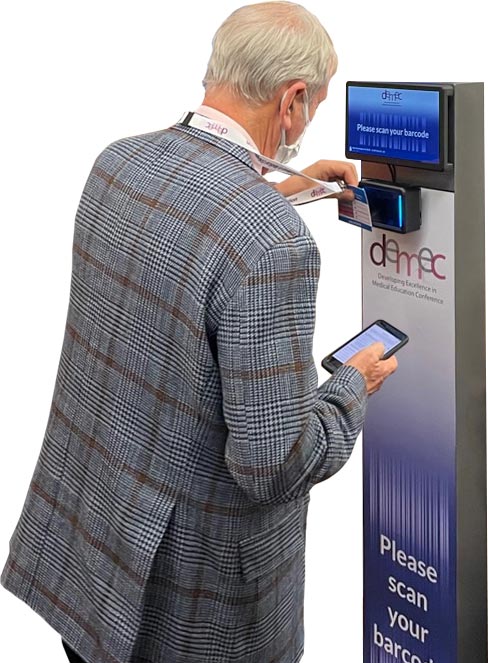 "Collecting data this way also meant that each session host could easily send out follow up literature and educational resources to the attendees."

Each ASPod is battery powered, negating the need for it to be placed near a plug socket. The ASPods have space for event branding or signage. "We branded the ASPod to promote our event and to remind delegates to present their badges at each of the rooms," says Dougall.

"Although we introduced the ASPods to create a more covid secure event, we will definitely use them again at our next event because they looked great and worked really, really well. They enabled delegates to enter our event and seminars easily and quickly whilst capturing delegate information in real time."

Find out more about our Onsite Registration Services